After harvested forages are placed in a silo, they often produce gases during the early stages of the fermentation process. Silo gases are difficult to detect because they are almost invisible, but signs of such gases may include:

If you detect silo gases, leave the area immediately. Physical reactions to silo gases may not be noticeable immediately after your exposure, but damage to your lungs may have already occurred. (Click here to learn more about respiratory illnesses related to farming practices in production agriculture.)

The most common silo gases are carbon dioxide (CO2) and nitrogen dioxide (NO2). Types and concentrations of silo gas vary depending on whether the silo is a conventional silo or oxygen-limiting silo and how much time has passed since the silage was placed in the silo. 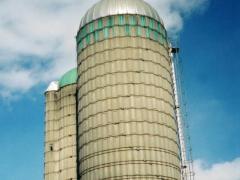 Conventional silos are often constructed of concrete staves held together with steel hoops, but some are made of reinforced concrete, steel, galvanized tile, or brick.

The most abundant type of gas in a conventional silo is nitrogen dioxide, which has a bleach-like odor and produces low-lying yellow, red, or dark brown fumes. Because it is heavier than air, nitrogen dioxide settles on top of the silage or flows down the chute and collects in adjoining feed rooms or other low-lying areas in the barn near the base of the silo.

Nitrogen dioxide is harmful because it causes severe irritation to the nose and throat, which can lead to lung inflammation. After low-level exposure to nitrogen dioxide, a person may experience very little immediate pain or discomfort but may later suffer from fluid collection in the lungs that may be fatal. Prolonged or recurring pneumonia-like symptoms can occur two to six weeks after initial exposure. Any person who has been exposed to any level of nitrogen dioxide, for even a short period of time, should seek immediate medical attention. 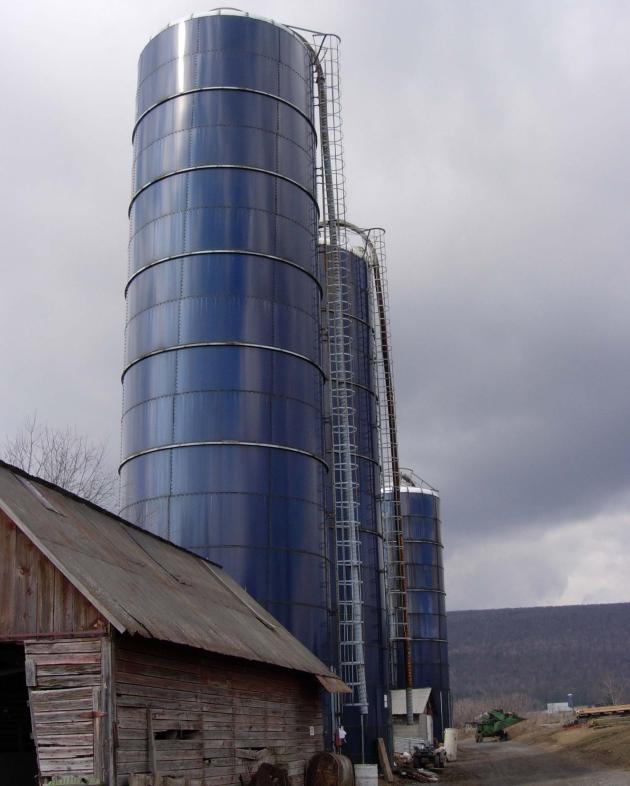 An oxygen-limiting silo is constructed of dark blue or green enamel-coated steel, poured reinforced concrete, or concrete staves. Oxygen-limiting silos are designed so that entering the silo is typically unnecessary.

In this type of silo, the fermentation process produces both nitrogen dioxide and carbon dioxide. The conditions in an oxygen-limiting silo promote greater production of carbon dioxide, which helps maintain high-quality silage.

Carbon dioxide is an odorless and colorless gas that displaces the life-sustaining oxygen in a silo. When levels of carbon dioxide are high, a person may have little warning before being overcome by this gas.

Decreasing the Risk of Exposure to Silo Gases in Conventional Silos

Manage Cookie Consent
To provide the best experiences, we use technologies like cookies to store and/or access device information. Consenting to these technologies will allow us to process data such as browsing behavior or unique IDs on this site. Not consenting or withdrawing consent, may adversely affect certain features and functions.
Manage options Manage services Manage vendors Read more about these purposes
View preferences
{title} {title} {title}